The CharcoTec technology aims at the removal of the disadvantages of traditional charcoaling without introducing “new” disadvantages for the local economies on terms of less employment, too high capital need and dependency on imported materials. At the same time however it does bring the advantages of the modern technology in terms of higher efficiencies (more charcoal per kg biomass input), in terms of potential use of other than woody materials as a source and thus less deforestation. It also will prevent environmental and health damage by capturing the nasty vapours, combusting them and so reusing the otherwise lost energy content in it, thus reducing fuel cost of the car coal process.

The CharcoTec kiln most probably is the only kiln on the market which can be almost completely produced locally, can be produced for a broad range of capacities and thus cost, is easy to operate – much alike the traditional kilns – and does hardly require any maintenance as has been the case with traditional kilns.

It however always requires two separate reactor vessels (which is to be understood as sophisticated definition of the process space, and looks like a simple cabinet or lorrey) where the firewood is placed in, dried and subsequently carbonised. By separating those two sub-processes the energy re-use is optimised and leads to the highest efficiencies possible with the technology, still keeping the operational concept simple.

The economic advantages of the CharcoTec kiln are such that entrepreneurs in the field of making charcoal over the world can afford the technology as invested money can be recovered within one operational year and the outlook is such that financing can be found easily.

CharcoTec has developed the technology by testing the first prototype in praxis on a site in Bosnia and thereafter in The Netherlands for the improved and in fact demonstration version, which still can be visited today.

On the right hand picture the quality of the produced charcoal can be seen clearly to be restaurant (nice big lumps) quality.

Based on the CharcoTec process principles the first pilot-plant has been designed and constructed back in 2014 with the aim to verify the operational functionalities and product quality and to come with an improved design for the commercial plant.

Tests have been performed with wood logs, wood chips and peat briquettes. The practical tests have been supported by lab-scale thermos-gravimetric analysis to determine the drying and carbonisation behaviour of the used biomass. Samples have been analysed on a TGA instrument from 30 °C to 900 °C. The results are shown below 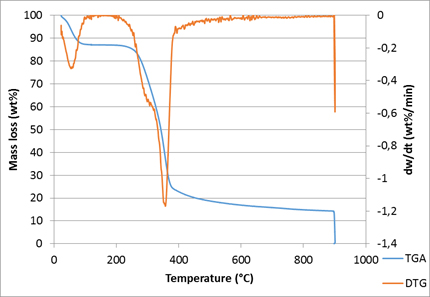 TGA and DTG profiles of wood

The results were as expected, first the biomass is dried around 100 oC followed by weight loss due to carbonisation starting at approx. 250 oC The behaviour of the pilot kiln during the tests was found to be similar.

The results were as expected, first the biomass is dried around 100 oC followed by weight loss due to carbonisation starting at approx. 250 oC The behaviour of the pilot kiln during the tests was found to be similar.

Based on these test results and supported by the theory CharcoTec constructed a second test kiln or better a first demonstration kiln, which is operated on a site near by the city of Groningen in The Netherlands. The installation consists of two gas-tight containers, two furnaces and a wood-fired stove. During the batch-wise operation one of the two containers is utilised for drying fresh wood, whereas the other container is used for carbonisation of the dried wood.

The operation of the kiln is comparable to traditional char coal work. Fresh, wet wood is manually loaded into a container, which is subsequently closed and place In the free kiln, which is connected to a gas-line to subtract the gases coming off the char coal process while operating: in the beginning water vapour during drying and combustible and health endangering off-gases during carbonisation. The off-gas is used to convert the energy of the combustion into drying and/or carbonising before being vented at relatively low temperatures to the environment through the chimney or the wood stove.

The process is started as a traditional kiln by burning some biomass in the wood stove. As the efficiency of the kiln is higher there will be less firewood burned than in a conventional kiln. After the process has ended, the carbonisation container is disconnected from the off-gas line and moved outside for cooling. A new container filled with wet wood while the first batch was processed is than placed into the kiln. By switching a number of valves the two separate kilns reverse their duty, the drier becomes the carboniser and vice versa, and the production of char will get on, thus almost making a continuous process by adding one extra vessel or kiln to the process.

In September 2015 the demo-plant was taken into operation on the site of Stainkoeln in the city of Groningen. The plant consists of two furnaces (insulated 10 ft containers), a wood stove, four reactors of each 3,5 m3 and a chimney.

Off-gases (water vapour) from the drying process are vented. The plant is equipped with a number of thermocouples for monitoring the process.

The demo-plant is used to establish and optimize the operational conditions for the production of high quality charcoal from different types and sizes of biomass. Biomasses of different sources (such as wood with varying origin and particle size distribution, agricultural residues like straw, reed and hay as well as peat) are already taken into the program and testing is on-going and can be extended with other materials as a source at any time suitable to the client.

Do you want more information?